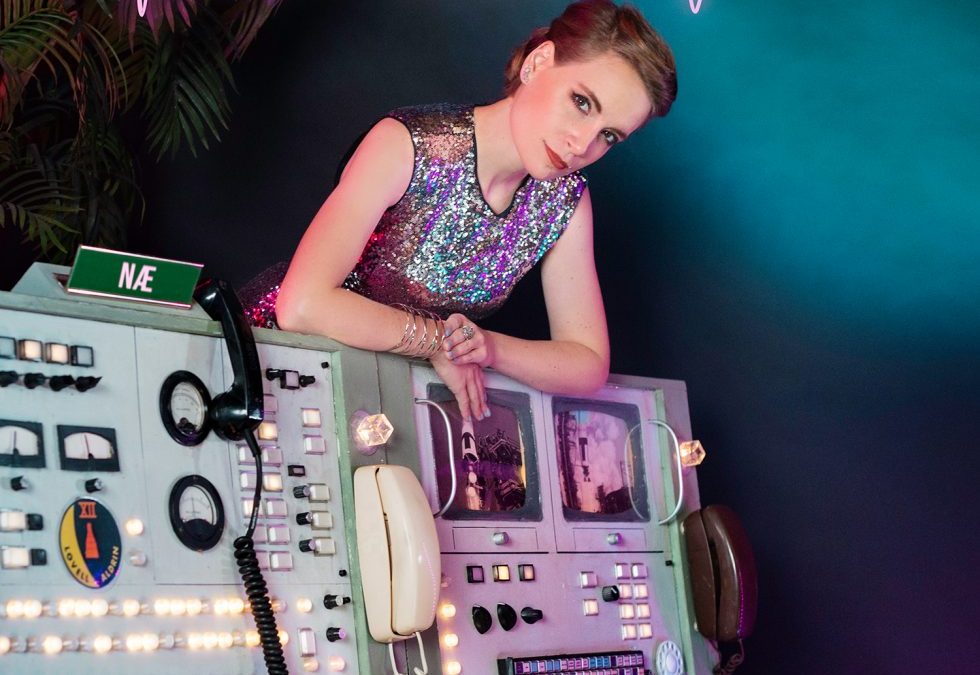 It’s only been about 3 weeks since I started this new Music Blog and I already have had the opportunity to chat with 6 very talented artists from around the world for your listening pleasure! So far, we’ve sampled some hip hop from Adri Vinchira in Belgium, soaked in the smooth synthwaves of The Golden Hour in Rome, Italy, and today, I have the privilege of introducing you to the Confectionery Astronaut herself, the multi-talented music, visual, and performing artist, NÆ.

Based in Chicago, Illinois, NÆ is the persona of visual artist, JaNae Contag.

JaNae released her first EP—Implied Elegance— as NÆ in 2015 and relocated to Chicago the following year where she currently teaches at The Art School at DePaul University in Chicago.

NÆ is an artist whose music style embodies inquisitiveness and playfulness with a serious side of synth edge and pop vibes. She is inspired by a tradition of multi-media female artists such as Laurie Anderson, St. Vincent’s Annie Clark, Björk, and Patti Smith. NÆ’s own sonic works blend elements of electronic, dance pop, and 80s synth pop into a unique and glittery dreamworld, full of out of this world possibility.

Thematically, her music is a witty commentary on the technologically dependent and often addicted lifestyles of aspirational America, an intriguing exploration of the Starbucks-powered modern day life.

NÆ has been featured in blogs, podcasts, and publications internationally, including Fierce & Fabulous Revolution, Esthetic Lens Magazine, Scapi Magazine, the What the Punk?! Podcast, and the Advance Your Art Podcast, amongst others.

Her 2021 full-length album, Push Button Future (February, 2021), is a concept album centered around these themes. This album is a collaboration with Ryan Black, who has contributed to the album as an Artist (Blizzle), Producer, and Mixing Engineer, and is founder of the Chicago-based record label, REB Records.

With the launch of the album Push Button Future, NÆ and Blizz introduced their monthly, live-stream concert series for 2021 with the first official season of Saturnae: Orbital Ice Cream, an interactive live-stream series which they host from the REB Records Studio in Chicago.

Saturnae incorporates original music, improvisation, and episodic narrative that gives viewers the opportunity to interact and determine the episode’s events as a “choose your own adventure” type of experience.

In this imaginative, fantastical narrative, NÆ and Blizz have accepted the mission of being Ice Cream Ambassadors from Earth’s International Ice Cream Consortium (IICC). Using their Music-Powered Spaceship (the MPS-88), they must exchange Earthly science and culture for recipes held deep in the Ice Cream Vaults of distant planets. Eventually, they will bring them back and help bolster Earth’s own retail economy.

Saturnae: Orbital Ice Cream engages with experts from various fields in Science, Technology, Engineering, and Math (STEM), and other areas of scientific research including academics in sociology, psychology, and cultural studies fields.

The artists behind this production, JaNae Contag and Ryan Black, have equipped their studio as a live streaming set, including multiple cameras, green screen effects, and they incorporate handmade arts & crafts scenes. They embrace the technology of today and the DIY aesthetic of 80’s sci-fi films. Saturnae: Orbital Ice Cream is educational, humorous, and features both improvisation and original music. All instruments are performed live, with analog loop pedals.

Saturnae has been described as:

“A Wayne’s World for Millennials”

Woozy Magazine describes Saturnae as, “not only visually stimulating and sharp, it is also entertaining, fun to watch, and an impressive culmination of talent.”

The most recent episode at the time of this article is Episode 5 featuring Waking April.

Please show some support for NÆ by following her accounts and listening to her music. Independent artists rely on the support of the music community. You can actually make a difference in an artist’s life and career by showing your support in these ways!