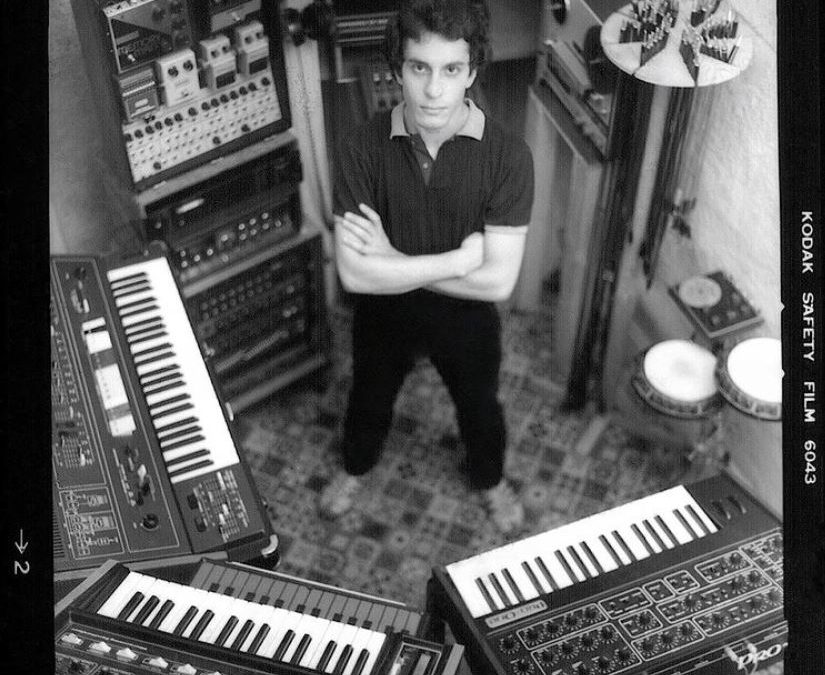 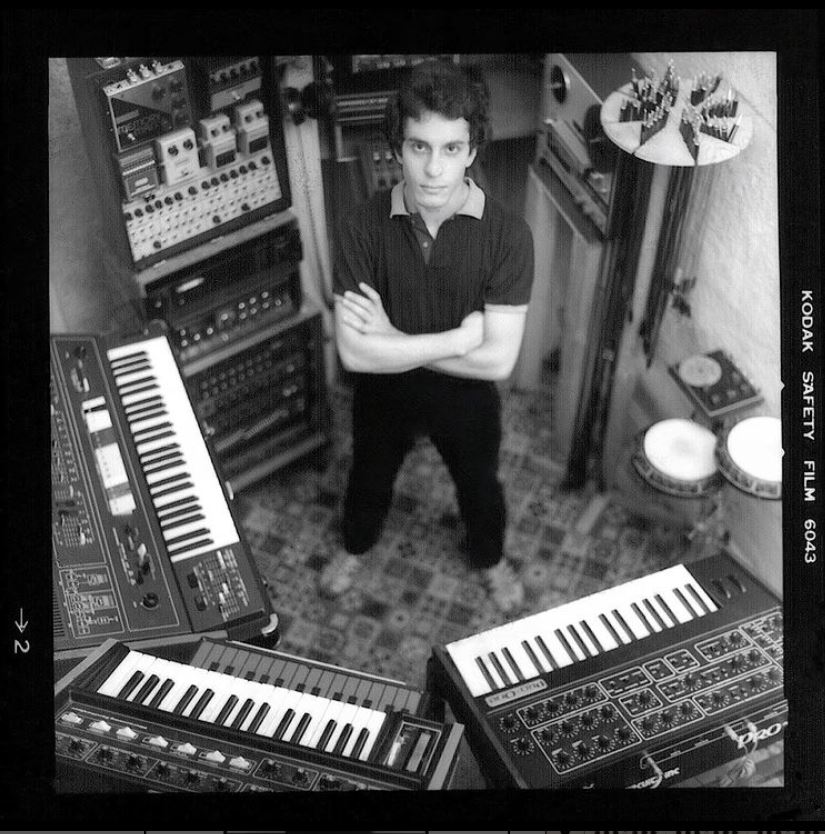 Drew Schlesinger in his studio in NYC, 1980s

Drew is a synthesist, sound designer, and composer of electronica and ambient music. He also blogs about synthesists and composers of the electronic realm on his Instagram account, instagram.com/drewschlesinger. His Instagram posts offer a fascinating history of synth based music and offer insights into the leading figures and machines that helped to shape this art form. He explores the celebrated as well as the lesser known stories and people involved.

The Radar Echoes Story – What’s old is old but new again
…Kind of:

“In 1977 while in college I attended the Boston School of Electronic Music for a Summer Session which was a transformational experience. I had a little ‘studio’ with a Micromoog organ, a 4 track and 2 track for echo, and was starting to compose and learn about synthesizers. Going to BSEM taught me all about the fundamentals of synthesis, sound, and sound design, and they had a ton of amazing synths and gear. After that I kept pestering my parents for money to help expand my gear, and by 1978 I had a pretty good set up that also included an Oberheim Expander Module and 8 Step Sequencer with all the patch points exposed, and that combined with the Micromoog was a small modular system. I also obtained a Mutron B-Phase, an A/DA Flanger, and a Furman Spring Reverb. It was with that set up that I recorded ‘Summer Synthesis 1978’ with David Torn who had just purchased an ARP Avatar Guitar synth which was nothing short of amazing.”

“In 1980, I moved to NYC and was working as a traveling salesman for our family’s furniture business by day and continued to build out a small but pretty powerful synth studio in a small anteroom off of my bedroom. This was the beginning of New Wave with artists like Gary Numan, OMD, Depeche Mode, Devo, Human League and others who were doing synth pop. I had always been a deep Kraftwerk fan since the early 1970s, and Brian Eno loomed large since the first Roxy Music album with his use of treatments and processing of sounds.”

“Though I’d never done so before, I decided to try writing songs and singing which was totally alien for me. So during 1980 and early 1981, I recorded a bunch of songs using the four and two track recorders to ultimately get about 6-8 tracks total by bouncing down from 4 tracks to a stereo mix, putting that back on the 4 track, adding vocals and doing a final stereo mix, always playing additional parts while the mix was occurring. All the effects were printed with each part as it was played and everything was played manually – this was the stone age with no sequencers, computers, DAWs, internet, cell phones, etc etc.”

“The very first song I wrote was ‘I’m a Toy’ which was/is pretty weird, but has an incredible processed/pitch shifted guitar solo by David Torn which was one take. I had an MXR Pitch Transposer that had an accessory unit with four knobs that allowed you to set four different pitch transposition settings. So while David played, I’d be futzing with the presets choosing pitches at random as he played.”

“The Dokorder 4 Track did not have remote punch in and I wasn’t in reach of the synths, so everything had to be set up, balanced, effected and played pretty much in one pass. It was difficult but the benefit looking back was that the music breathed… no quantization etc. In any event I recorded a bunch of songs that were released on cassette called ‘Sending Out Signals’ under the name Radar. They were dubbed one at a time in my apartment, given to friends and sold at stores like Bleeker Bob’s in the West Village and over the next year I did another cassette of songs called ‘Jungle Life’.”

“I decided last year that it was time to release some of these songs recorded over 40 years ago into the world to just complete the journey, especially with the huge interest that’s occurred recently with vintage synths and synth music. The master tapes had been transferred to my computer about 10 years ago and though they sounded pretty good, they clearly needed some professional mastering, thus I hired Marc Matthews at Synth Music Mastering to make them sound balanced without losing the original analog mojo from the originals. He did a wonderful job and I finally got it up on Bandcamp in February. I’m hoping to do a Radar Echoes 2 with some other songs that need a bit of fixing in the next few months as well.”

“I’m hoping people find the music fun and enjoyable and get that it was total exploration into new territory. I think there’s some really cool synthesis, sounds, and processing there.”

An Interview with Drew Schlesinger

When did you first start composing with synthesizers and what model of synthesizer did you first use?
I bought my first synth a Micromoog in 1975 after seeing a prototype model from one of my professors at college who collaborated with Moog. During the Christmas holiday, I went home and told my parents, “I HAVE to get one of these!” Then I got a 4 track reel to reel and had a friend turn my 2 track Sony into a tape echo…from there is was off to outer space land.

What synthesizers do you like to work with these days?

There are so many incredible devices it’s hard to decide what to use, and having done sound design for a lot of devices, I’ve really shrunk my tools to a very few items. For hardware, I just have my Cornwall EMS Synthi that took 13 years to get (though I’ve always used a Synthi since 1979) and a custom two panel STS Serge Modular that I designed (and Rex Probe built) about 12 years ago. I’ve been using STS (Sound Transform Systems) Serge Modular since around 1991 and they still make the best versions in my opinion. The all banana approach is so powerful as there’s no distinction between, CV, Audio, Triggers…anything can go anywhere and you never need multiples. So many things can cross-modulate each other. It sounds amazing and constantly surprises me with new sounds.

My main platform is Ableton LIVE which I use like a multitrack recorder and large modular audio, synth, effects device. With all the Max for Live modulation devices you can totally mangle and modulate things in Live which is wonderful…I could likely just use Live and a few other things and be fine. Effects plugins are mostly Sound Toys who I’ve worked with since their inception, Valhalla reverbs and few others. The softsynths are also just a few: Omnisphere which is incredible, Madrona Labs Aalto which is amazing, Virtual CZ so I have access to my CZ library of sounds going back to 1986, and the Korg Wavestation plugin, another of my all time favorite synths. That’s it.

Do you have any recommendations for people who are just starting out with sound design or electronic music in general?

I do. Start small with a few things and get to know them well and learn the basics of synthesis as almost everything expands on the basics. Having too many devices can lead to a “search and destroy” syndrome, where you spend so much time looking for sounds as opposed to making music. With softsynths it’s so easy to build up a huge collection and be overwhelmed. It’s amazing what you can do with a few good devices and some effects if you know them well. Get a few synths that do say analog, FM, Wavetable and sampling, then get to know how they work and become intimate with them…then expand from there. Limitations are a good thing.

Who do you think was the single most influential electronic artist of all time?

Wow, that’s a really good question and I’m not sure there is one. But if I HAD to select one it would be Wendy Carlos as she changed the world of music with “Switched on Bach”. That album was so brilliant in the sounds, playing an execution and exposed the world to synthesizers in a format they could comprehend via Bach’s music. There are many others that came before her in terms of defining and developing the art of electronic music especially in the academic world, but the combination of her talent, the advent of the large Moog Modular, and the use of that tool and its sounds to reimagine such classic music was so revolutionary.

Who in your opinion is considered to be the first electronic music artist (someone who used purely electronic instruments to create their sound)?

This one’s easier, at least for me and that’s Morton Subotnick. To me, he’s the YANG to Wendy Carlos’ YING as he not only envisioned a new synthesizer approach and instrument along with Don Buchla, but created a complete new vocabulary of electronic sound based on gestures and a non-standard keyboard or 12 tone approach. He took the ideas of music completely to a whole new level with the Buchla and devised what we now call the “West Coast Sound”. While his “Silver Apples of the Moon” and “The Wild Bull” were seminal, for me the albums “Touch”, “Sidewinder” and “Four Butterflies” were stunning and totally impacted my ideas of sound, sound design and synthesis. He’s brilliant on so many levels.

Please show some support for Drew Schlesinger by following his accounts and listening to his music. Independent artists rely on the support of the music community. You can actually make a difference in an artist’s life and career by showing your support in these ways!