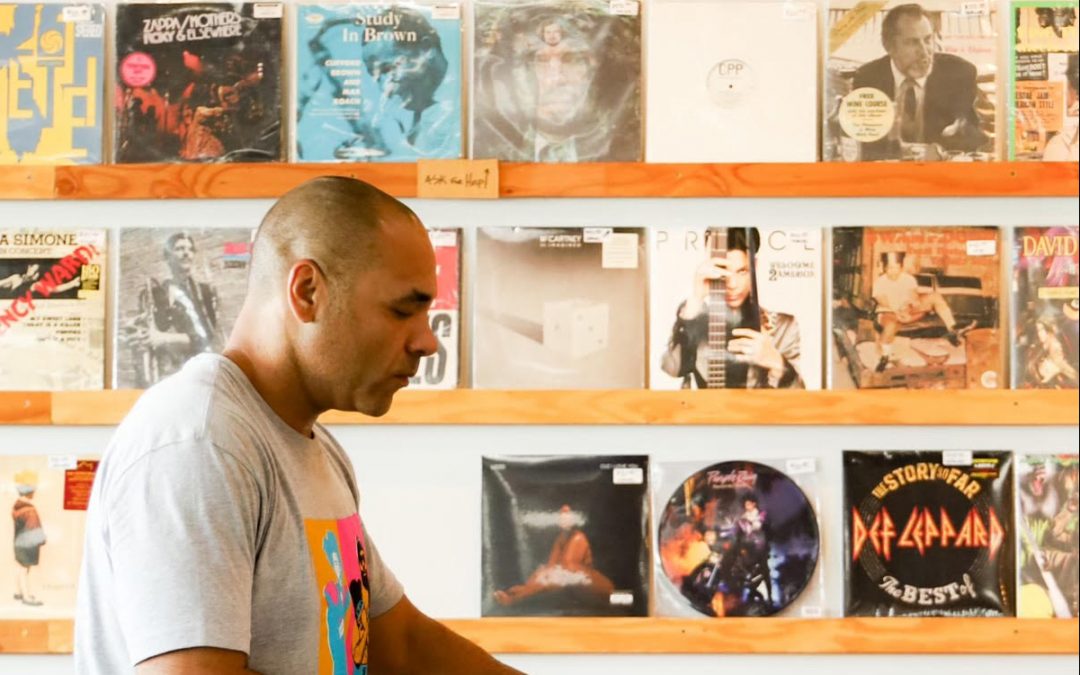 Today’s special guest is art director, food enthusiast, and music lover Rick DeSoto. Rick is based in the heart of the 18b Arts District in Downtown Las Vegas, Nevada. A graphic designer by day, Rick is also a lifelong music lover with a passion for record collecting.

I first discovered Rick and his record collection on Instagram, @rickdesoto. He also shares photos of his travels as well as his graphic design work on his IG Blog.

My Interview with Rick

Thanks for taking the time to chat with me today, Rick. Please tell us a bit about yourself and how you got into record collecting.

“Although my day job is all things graphic design and advertising, my true passion is and has always been music. There’s nothing I love more than discovering new music and putting others onto quality music. Within the last 6 years or so I got into record collecting because a lot of the new music started to feel a bit disposable due to all these streaming services making it easy for artists to pump out music quickly to the masses. It made me miss the days of heading to the record store weekly (back when albums were still released on Tuesdays) and sifting through the fresh new releases. There was something magical about picking up a highly anticipated album, rushing to open it up as soon as you got in the car and listening to it for the first time while reading through the liner notes and checking out the album artwork.

Once I finally gave in to Spotify and stopped buying CDs, I realized soon after that there was something missing. I didn’t have that hands-on experience anymore or the same excitement of an album release. I still use streaming services daily when I’m working or on the go, but to fill the void of not buying physical copies anymore I decided to start digging for my music once again. But this time I switched from CDs to vinyl. The pandemic definitely ramped up my vinyl collecting. Being couped up in the house all day gave me an opportunity to dive deep into my collection and start to appreciate it even more.”

What was the first album in your record collection? When did you start collecting vinyl?

“Back in college I thought it would be cool to get a couple of my favorite albums on vinyl just to frame and hang as wall art with no real intention of ever playing them. I had a couple Wu-Tang Clan and A Tribe Called Quest albums hanging up. But what really got the ball rolling on my collecting was when my wife gifted me 3 albums by some of my favorite hip hop artists for Christmas. Those albums were Midnight Marauders (A Tribe Called Quest), Things Fall Apart (The Roots) and Welcome 2 Detroit (Jay Dee/J Dilla). Instead of hanging those up on the wall, I decided to use those as a base to start building my collection.”

What is your favorite genre? Favorite artist?

“Picking one genre is a difficult task as it seems to fluctuate with whatever mood I’m in. One day it might be reggae, another day it might be some of that smooth old school soul. But hip hop will always be my first true love. However, Earth, Wind and Fire are my all-time favorites without a doubt!”

What do you think future of music will be like? Do you think vinyl will continue to play on or is it in danger of becoming a forgotten relic of the past?

“I’d say that the future of music will likely continue to be very experimental and follow whatever the current trends in modern technology are at the time. Social media will continue to be a major asset for artists to get their music out to a wider audience and I can see music becoming even more artificial intelligence and computer based.

Do I think vinyl is in danger? Absolutely not! I feel it’s timeless and there are so many other music heads like myself that enjoy the nostalgia of spinning records. There’s something about vinyl that just can’t be replaced with streaming services. From opening the album jacket and reading the liner notes to displaying the beautiful large-sized album art, it’s a beautiful way to experience and appreciate music – both new and old. In fact, vinyl seems to have become so popular in recent years that pressing plants are having a hard time keeping up with the demand for vinyl. I’m still waiting on an album I pre-ordered almost 6 months ago to arrive. Vinyl isn’t going anywhere anytime soon.”

On Deck with Rick DeSoto Today

I asked Rick to choose some of his favorite albums from his collection and share a bit about why the album was selected. The result is a cool blend of hip hop, reggae, and fusion influences sure to delight the veteran record collector and new listener alike.

“I’ll never forget walking down the rap/hip hop isle of the record store and catching this album cover out of the corner of my eye. It was beautiful. I thought it was misplaced at first. I picked it up based off the strength of the album art not knowing anything about it. The intro track gave me goosebumps and I was instantly hooked. Fun fact: the duo met in a popular online music forum and they made the album entirely online sending files back and forth via AOL Instant Messenger. The Dutch producer Nicolay was still living in The Netherlands. They hadn’t even met in person until after the album was created. You would never know it with how seamlessly this album flows.”

“This album is literally the foundation of my musical taste. The sophomore album by one of my all time favorite hip hop groups just celebrated 30 years and is still as fresh today as it was back in 1991. From front to back, this album is a hip hop masterpiece that belongs in every collection.”

“I was so excited when this holy grail of an album finally got a repress. A beautiful Brazilian Jazz Samba album that I stumbled upon after hearing various samples sprinkled throughout the hip hop world along with a rave review from Madlib, one of my favorite producers. With outstanding production and melodies, this once hard to find Brazilian gem is one of my favorites to spin for Sunday brunch. Short and sweet, it definitely leaves you wanting more.”

“I’ve always been a fan of roots reggae. It’s in my blood. But that style of reggae seemed to slowly be fading away over time with the emergence of dancehall in Jamaica. Then came a movement about a decade or so ago called the Reggae Revival which saw a group of young artists out of Jamaica bringing back that roots style and mashing it with elements of conscious reggae, lovers rock, pop and hip hop, essentially giving life to what seemed to be a dying genre. One of the artists leading the way in this new-school reggae is Chronixx, who dropped this superb, modern reggae album which is filled with inspiring lyrics and fresh new sounds.”

Earth, Wind & Fire – That’s The Way Of The World

“EWF was a staple in my household as a youngin’. Their horns always mesmerized me. Although ‘Fantasy’ is my favorite song by them, this is my favorite all around album. This record oozes with positivity and spirituality, combining jazz, funk, soul, disco and even some African. There’s really nothing to dislike about EWF. I challenge you to listen to this album and not instantly get in a good mode.”

“Back in the late 90’s a group of artist, including Questlove, J Dilla, D’Angelo and Erykah Badu, among others, formed a collective called the Soulquarians who all collaborated together to release a solid handful of hip hop/neo-soul albums into the early 2000’s. This was the first album released in this Soulquarians era. Over the years this album has become quite iconic, combining soulful hip hop with live instrumentation, and pretty much catapulted them into the group they are today.”

Favorite Track: “Act Too (The Love of My Life)”

“Another staple in my household growing up was Steely Dan. It brings up good memories. I still have visions of my mother dancing around to their music every time I throw this album on. Widely known as an audiophile masterpiece, this is one of the smoothest records in my collection. It pairs perfectly with a nice glass of bourbon on a nice, chill evening.”

Follow Rick and his journey around Las Vegas as well as his record collection on Instagram. You can also follow Rick’s #NowSpinning Playlist on Spotify, a playlist with over 24 hours of selected tracks.